The biggest increase in sales revenues was reported by the Payment business unit reaching EUR 12.4 million, up 18% compared with the same period of the last year. The main contributor to this result were sales revenues from the POS maintenance services (increase by EUR 1.1. million) and ATM maintenance services (up EUR 0.4 million) as well as card processing part whose services were not offered by the ASEE Group in the first quarter of 2016 (increase by EUR 0.4 million). Sales revenues in the Systems Integration business unit amounted to EUR 11.1 million in the first-quarter, up EUR 0.9 million (9%) compared with the first three months of the previous year. Whereas sales revenues in the Banking business unit grew by EUR 0.7 million (10%) totaling EUR 7.5 million compared with the same period of the previous year. This growth resulted mostly from bigger than last year revenues from mobile and authentication solutions.

- We started 2017 well. During the first three months we observed an increased interest in our authentication and mobile solutions similarly to the last quarter of the previous year.  I expect this trend to continue. I am also pleased with the revenues from the new solutions in our portfolio such as card processing services which confirm a market demand in this area identified earlier by us. - commented Piotr Jeleński, President of the Management Board of Asseco South Eastern Europe S.A.

First-quarter operating profit (EBIT) amounted to EUR 3 million, up 28% compared with the same period of the previous year.

Operating profitability of ASEE Group for the first-quarter of 2017 amounted to 9.6%.

The ASEE Group’s first-quarter net profit totaled EUR 2.4 million and was higher by 27%  compared with the first three months of 2016.

The company announced backlog value for 2017 amounting to EUR 92.2 million, which is 2% less compared with the last year. 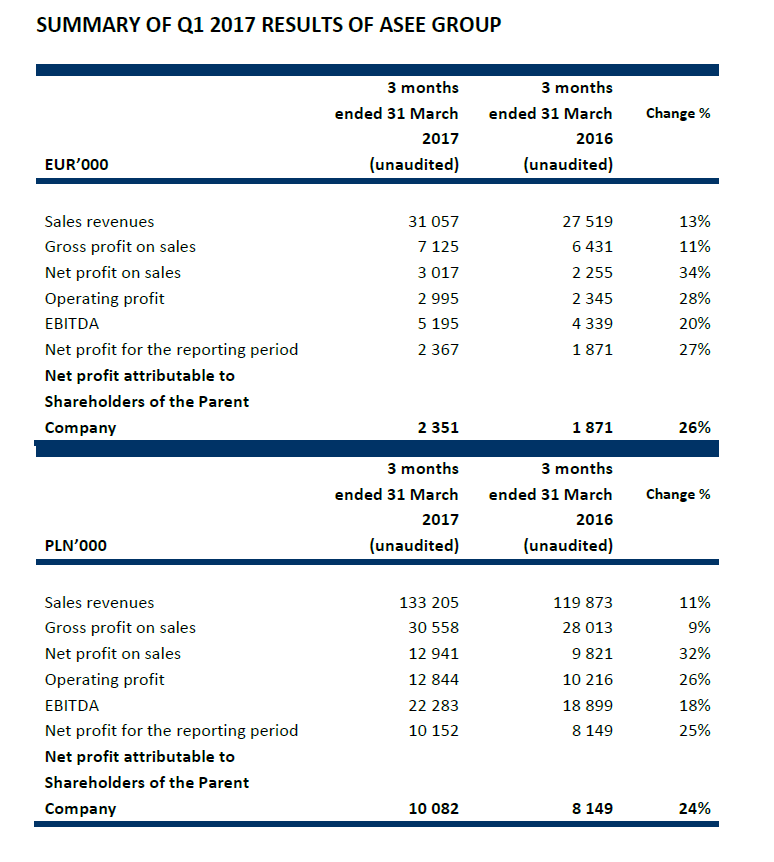