Warsaw, August 6th, 2015: Asseco South Eastern Europe Group, (Asseco SEE, ASEE) has announced the second quarter results which are better compared with the same period of the last year. This is the fifth quarter in a row when the company recorded better results compared to the same periods of the previous years.

Sales revenue after the first two quarters amounted to EUR 53.3 million compared to EUR 52.7 million in the same period of 2014. The biggest percentage growth was recorded by the Banking business unit, where revenue increased as much as 22% from EUR 12 million in the same period of 2014 to EUR 14.7 million after the first half of this year. Payment business unit recorded EUR 3 million growth (20%) compared with the first six months of 2014 reaching EUR 18.7 at the end of the second quarter of 2015.

The results generated by ASEE in the second quarter of 2015 indicate the same trends which were already visible in the first three months of this year – revenue growth and profitability improvement in the Banking and Payment business units whereas worse than last year figures recorded by the System Integration business unit. - commented Piotr Jeleński, President of the Management Board of Asseco South Eastern Europe S.A. – A bigger share of revenue from own services and solutions in the revenue structure of the ASEE Group resulted in the increase in gross profit on sales – he added.

Sales revenue of own services and solutions amounted to EUR 33 million (62% of total revenue) in the first half of 2015 whereas in the same period of the last year it was EUR 30 million (57%).

Operating profitability of ASEE Group after 6 months of 2015 amounted to 11%, which is up 2.6 p.p compared with the same period of the last year.

The ASEE Group’s net profit grew by 24% compared to the first half of the previous year, reaching EUR 4.8 million after 6 months of 2015.

The company announced backlog value for 2015 amounting to EUR 96.2 million, an increase of 7% compared to EUR 89.6 in the same period of the last year. 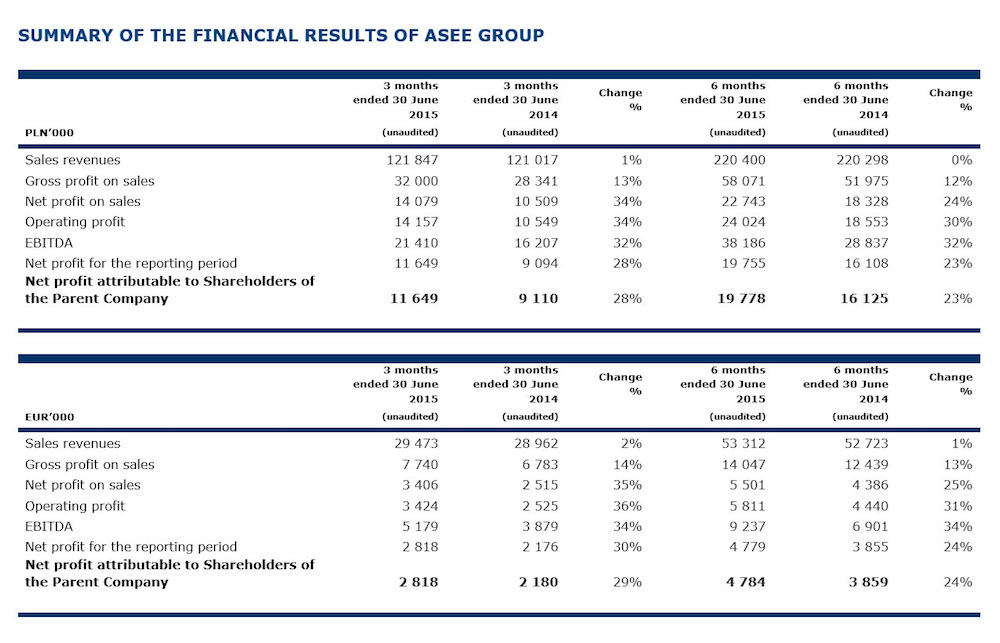