Warsaw, October 21st, 2014: Asseco South Eastern Europe Group, (Asseco SEE, ASEE) published financial results for the 3rd quarter of 2014. The figures show growths both compared to the last year and to the previous quarter of 2014.

Sales revenue after 9 months grew to EUR 80.25 million from EUR 75.8 million in the same period of 2013, an increase of 6%. The biggest revenue growth was recorded in the Payment business unit – up almost EUR 5 million compared with 9 months of 2013.

Operating profit (EBIT) amounted to EUR 7.3 million, an increase of 7% compared with EUR 6.8 million in the first 9 months of 2013. Improved EBIT resulted from a better performance of the System Integration unit and a growth recorded by the Payment business unit.

Operating profitability of ASEE Group after 9 months of 2014 amounted to slightly above 9%, which is up 0,13p.p.

“In the third quarter we successfully completed a complex implementation of the front-office client service system integrated with a multichannel access system for Telenor in Serbia. An increase of market share of outsourcing projects in the Payment business unit contributed to ASEE Group’s good results. We are going to continue to implement our strategy consisting, among others, in winning international banks as clients as well as expanding to new markets" - commented Piotr Jeleński, President of the Management Board of Asseco South Eastern Europe S.A.

The company announced backlog value after nine months of 2014 amounting to EUR 104.6 million, an increase of 7% compared with the same period of the last year. 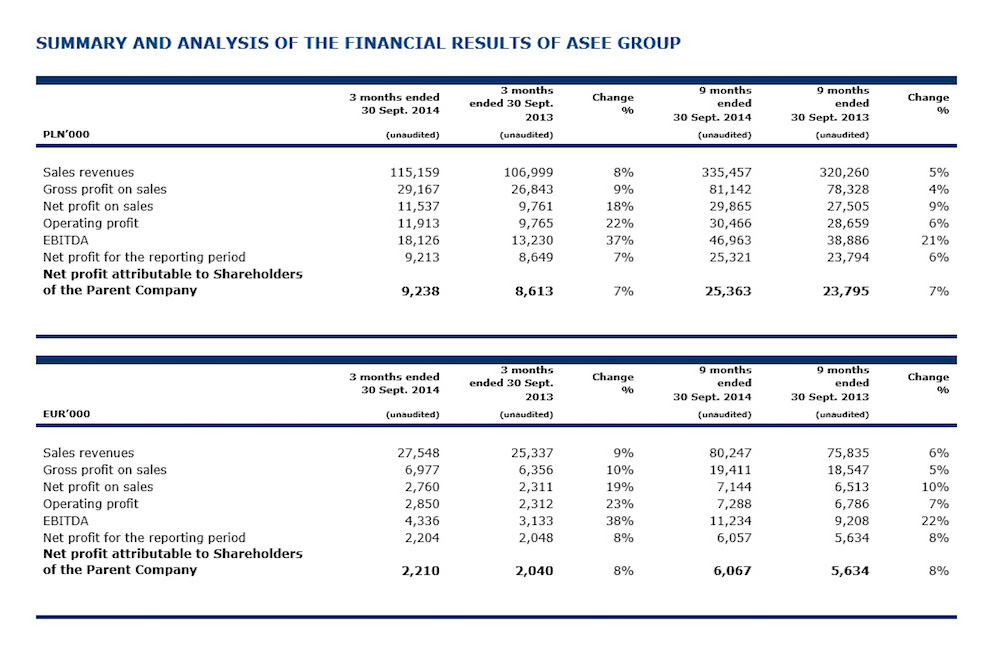