Warsaw, 25 April 2016. Asseco South Eastern Europe Group, (Asseco SEE, ASEE) has announced first-quarter 2016 results according to which the company recorded sales revenue growth by EUR 3.8 million, that is by 16% compared with the same period of the last year.

The biggest increase in sales revenue in terms of value was generated by the Payment business unit, up EUR 1.6 million (18%) compared with the last year, reaching EUR 10.5 million. The growth was achieved mainly by the physical payments part with the biggest increases coming from Croatia, Serbia and Slovenia. The Systems Integration business unit ended the first quarter of 2016 with sales revenue totaling EUR 10.2 million, which is up EUR 2.2 million (28%), compared with the same period of 2015. The increases were recorded mainly in Serbia, where sales revenue in this unit was EUR 1.5 million bigger than last year and in Turkey and Romania. Sales revenue in the Banking business unit in the first quarter of 2016 reached EUR 6.8 million which was similar to the sales revenue after the first three months of 2015.

- We started 2016 with the purchase of a majority stake at ChipCard in Serbia, thanks to which we will be able to offer more diversified and complete solutions in the area of payment. We also signed a few interesting agreements with new clients, e.g. another contract in Africa, this time with Global Leasing Company in Egypt, for our proprietary solution LeaseFlex, which shows the geographic direction in which we want to expand. Another agreement worth mentioning is for a complete digital banking solution at MTS banka in Serbia, which proves our expertise in supporting banks in their digital transformation. - commented Piotr Jeleński, President of the Management Board of Asseco South Eastern Europe S.A.

Operating profit (EBIT) in the first quarter of 2016 amounted to EUR 2.3 million and was slightly lower (by EUR 33 k) than in the same period of the last year.

Operating profitability of ASEE Group after 3 months of 2016 amounted to 8.5%.

The company announced backlog value for 2016 amounting to EUR 92.9 million, up 17% compared to the same period of the last year. 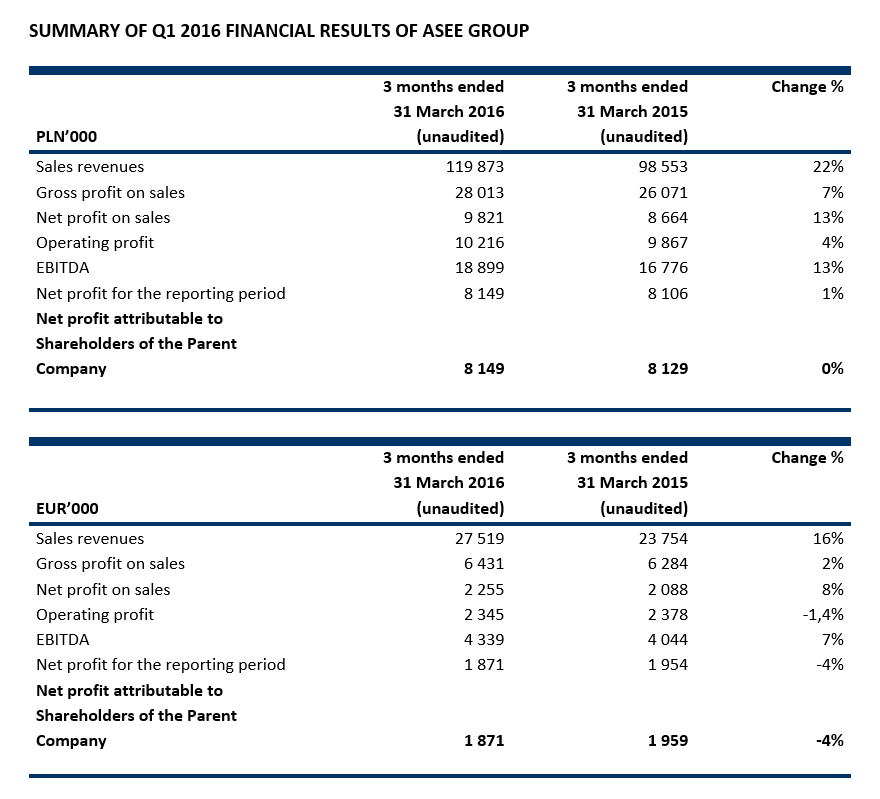