Warsaw, February 19th, 2015: Asseco South Eastern Europe Group, (Asseco SEE, ASEE) ended 2014 with better results than in 2013, including a considerable growth in Q4 compared with the same period of the last year.

Sales revenue after 12 months grew to EUR 119.6 million from EUR 111.7 million in the same period of 2013, an increase of 7%. The biggest revenue growth was recorded in the Payment business unit – up EUR 5.7 million compared with 12 months of 2013. In System Integration revenue also grew from EUR 55.8 million to EUR 57.3 million, an increase of EUR 1.5 million (almost 3%), where profitability was improved too.

Moreover, sales revenue of own solutions increased by almost 14% from EUR 53.7 million in the same period of 2013 to EUR 61 million after the fourth quarter of 2014.

Operating profit (EBIT) amounted to EUR 11 million, an increase of 10% compared with EUR 10 million after 12 months of 2013. Improved EBIT resulted from a better performance of the System Integration unit and a growth recorded by the Payment business unit.

“In 2014 geographically the best results were generated in Turkey, with a big improvement also in Serbia, Croatia and Macedonia. Traditionally the best segment was Payment business unit which was joined by System Integration last year. Throughout the year we were implementing the strategy of increasing revenues from own solutions and services, expanding into new markets and growing revenues derived from international banking groups. Implemented program of organizational changes and focusing on strategic solutions also contributed to such good results in the last year. We have entered 2015 with optimism” - commented Piotr Jeleński, President of the Management Board of Asseco South Eastern Europe S.A.

The company announced backlog value for 2015 amounting to EUR 58 million, an increase of 12% compared with the same period of the last year. 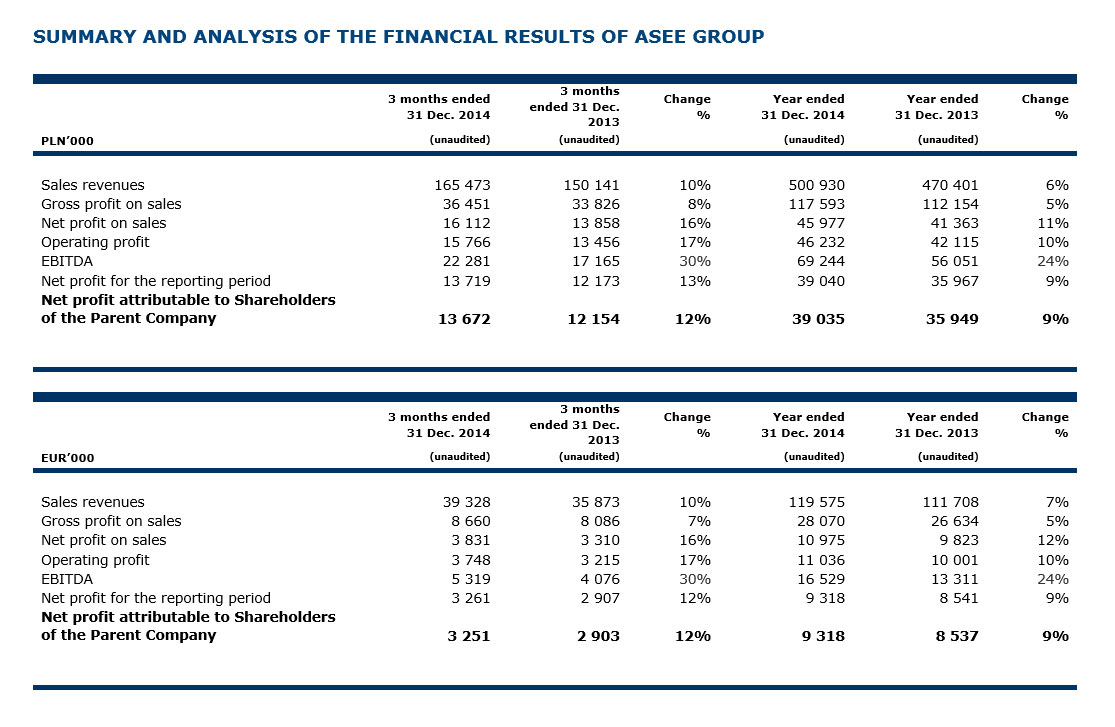